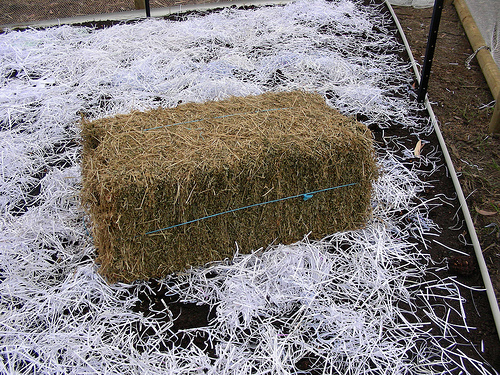 We’ve been pretty adamant at Upcycle and Company that just about anyone can be a gardener. One of the most common objections we hear from people who would love to grow their own food, but they’re convinced they don’t have space. No outside yard means no growth in their minds. Well, they couldn’t be further from the truth. How about a hay bale garden? We posted a link on Facebook this last week that shows how anything can be grown at home in hay bales.

Gardens can be planted anywhere. Even on concrete balconies or driveways.

The idea behind straw bale gardening is simple.  Plants grow in the top of the straw, which begins decomposing as soon as it gets wet. As the straw breaks down, it turns into a rich, compostable planter that’s ideal for growing vegetables.

The advantage of straw bale gardening is that you can set the bales anywhere where it’s sunny, as long as you can keep it watered.  poor soil?  it doesn’t matter.  you can even set the straw bales on a concrete driveway.
the first step – get a bale of straw.  you can find them at most garden centers and feed stores for under ten-dollars.

Sounds like a pretty good deal. At Upcycle, we created #NativeSoil to help those without appropriate growing conditions to get out there and do some practical growing.

Prepping the hay bale is a two-week process, so make sure you plan ahead. Step 1, thoroughly wet down the hay bale. From gardeners.com:

The last step is to add a well balanced all around fertilizer like #NativeSoil.  Since Native Soil is a slow release powdered fertilizer, the nutrients are available immediately and released slowly over the growing season. This allows you to have a one and done fertilizing philosophy. Once the hay bales begin to decay from the inside, they will begin to heat up. In roughly a week, you’re looking for an internal temperature of 75 – 80F.

At that time, the bed is primed and ready to receive your vegetable starts.

Don’t ever let anyone tell you that your concrete slab isn’t a great place to grow some tasty vegetables. When you’re growing in small spaces, you have to sometimes think outside the box.

The best part though? No weeds and you don’t even have to get your hands dirty.