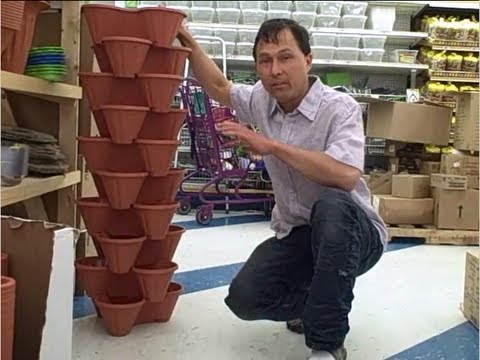 At Upcycle and Company, you know how adamant we are about saving money when we garden. We like saving money almost as we like saving space. That’s why I was so excited to stumble upon John Kohler’s post at Growing Your Greens when he went to the 99 Cent Only Store to find himself the materials for a cheap vertical garden. Now, this wasn’t a 99 cents and up, this was a 99 Cent Only store. It’s amazing how much technology is floating around the gardening world right now, but when it comes right down to it, sometimes the simplest idea is also the cheapest idea. That’s something we can get behind.

After all, being pound for pound cheaper than our competitors is something we pride ourselves on. Let’s listen to John for a bit and get ready to #FindYourSoilMate.

This is John Kohler with growingyourgreens.com. I have another exciting episode for you today. I’m outside the 99 only stores, and the 99 only stores are a chain of stores that sell things like it’s like a dollar store basically, and I’m here today to show you guys any products that may help you grow more food at home. Now, while I’m not into a lot of the products that they sell here, they do have some good deals. In the past, I’ve gotten plant clips and seeds and even air pumps for aquariums for $1.

You never, never,  know what I’m going to find and every day they always have new stuff. I’m excited to show you guys if there’s anything I the 99 store, or the dollar store, that’ll help you grow more food at home. So, we’re here in the dollar store and we’re inside and there’s literally thousands of items and a lot of them you probably just don’t need.

They don’t add any value to your life, but there are a few things here that will allow you to grow more food, and those are the things that I’m here to show you guys today. First off, of course, they have bulbs, a lot of bulbs. Most of these are not edible, but I want to show you guys a couple that are.

You got 12 Dutch onions, that’s 99 cents, defiantly a good deal. Also, they got the red baron Dutch onions. So, these bulbs you could plant not and definitely good to have some onions. So, $1 could grow you 12 onions.

In addition, they got some good deals on some seeds. The seed packet has been picked through a lot. The seeds here are not 99 cents, they’re cents. So, that’s actually 30 cents only, but 20 cents will buy you a packet of squash or cucumber or lettuce or carrots or radishes, even actually the best deal here is this corn here. This was marked at 1.99, 29 cents for a pack of corn seeds. So, next, I’m going to show you guys some planters that are actually stacking planters that they have here at the dollar store.

Now, these are the same, or at least very similar to the ones you just saw. Here they are right here. This is one kind. Once again, cents. These are the stacking planters. You can see this one’s 99 cents. There are no holes in this, so, you know, you’re going to have to pop some holes in it yourself, but, check this out, these are made to stack up very nicely, and they have 2 designs. They have this design and they have these guys over here. This is the circular design. They probably hold very similar amounts of soil. Check it out. For $10 you could get a setup like this. This setup is 10 high and this will grow you 30 plants.

So, you know, definitely a good deal. $10, 30 plants, because of the 99 only store. Now, once again, these are plastic. These are made in Israel, so they may be fairly high quality but they don’t have any holes in them and if you’re going to grow something this tall it can get kind of wobbly, so you may want to drill the holes out in the middle, right through here, and put like a nice tubing through there, like EMT tubing, something like that, to stabilize it and also of course run an irrigation system and make sure you pop those holes in it.

Now, I’m not a huge fan of plastic, but if plastic planters are going to allow you to grow more food, I’m all for it. So, next I’m going to show you guys planters that I do like, actually, that they have here at 99 only store. They got your standard clay pots. Now, these are nice clay pots. This one pot would be good for like one head of lettuce or some herbs. Actually, it’s really good to grow mint, something like this, grow your mint in here and then plant this underneath the ground so that the mint can’t spread out. So, that’s actually a nice tip, but 99 cents, a nice clay pot, definitely a good deal as well. Besides the pot, they also have potting soil for 99 cents. Now, I don’t recommend the potting soil here. You get hardly anything. This is so light, this is not a good deal, although they make it out to be.

Is it a Good Deal?

They’re showing tomatoes here, but I wouldn’t recommend this for tomatoes. These guys just kind of pop up like this and then there are 3 bars that hold this stable so it collapses for easy storage when you’re done with the season, and, you know, for 99 cents, definitely a good deal, but I would probably only use these and not tomatoes because you know what? This is not even that tall, maybe like 2 feet tall if that.

How to Build Cheap Vertical Gardens

Last thing I want to show you guys here and the 99 cents store that can help you grow more food, especially if you’re growing vertically in cheap vertical gardens, you need to tie so that you can get your plants off the ground so that they can grow vertically ’cause you may have more airspace than you do land if you live in a residential area. These guys right here. This is the first time I’ve seen these at the 99 store. These are clips, and these allow you to basically reuse these clips to pin up your tomatoes and all different kinds, peas and plants to bamboo stakes. It’s 99 cents for 16 reusable, that’s the thing, reusable plant clips. Great deal, and these guys, on the back, are marked 2.95. So, that’s 1/3 off here, and I know that these are definitely a good deal. In addition, they just got your standard flexible plant tape.

This stuff might cot 2-3 bucks at a nursery, just 99 cents here, but once again, I’d encourage you guy to get the reusable plant ties instead because you can use this year after year whereas if you just tear this off and tie things, usually that takes more time plus you usually got to throw this stuff away. They also have some tools down here, and a lot of these tools, you know, you guys get what you pay for.

I definitely wouldn’t recommend them. Some of them are nicer, something like this, you know, for $1, a little hand trough or shovel thing, oops, that breaks. I probably wouldn’t recommend some of the stuff that I showed you guys. They also have some irrigation things, like plastic sprinklers and whatnot. Now, once again, you guys get what you pay for and I’d probably recommend you spending a little bit more and getting a lot higher quality items, Hopefully you guys enjoyed this episode, learning more about some of these items at the 99 cent only store that’ll help you grow more food at home.

Once again, my name is John Kohler with growingoyurgreens.com. We’ll see you next time and keep on growing…